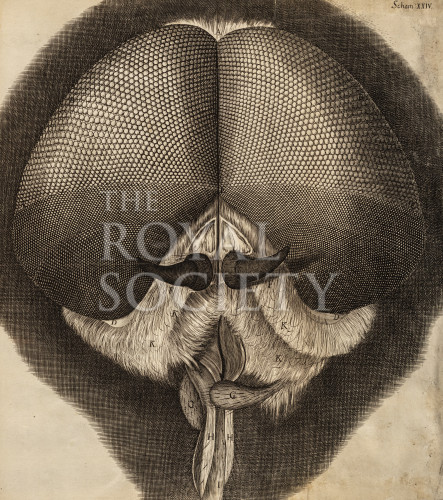 Image number: RS.1885
Credit: © The Royal Society
Looking for a special gift? Buy a print of this image.

Written in the associated text: ‘this outward skin, like the Cornea of the eyes of the greater Animals, was both flexible and transparent, and seem’d through the Microscope, perfectly to resemble the very substance of the Cornea of a man’s eye; for having cut out the clutter, and remov’d the dark and mucuous stuff that is subjacent to it, I could see it transparent like a thin piece of skin’

Plate 24 from Robert Hooke’s Micrographia: or some physiological descriptions of minute bodies made by magnifying glasses with observations and inquiries thereupon (1665), the first fully-illustrated book on the topic of microscopy. In the preface Hooke asserts that he had discovered ‘a new visible World’.