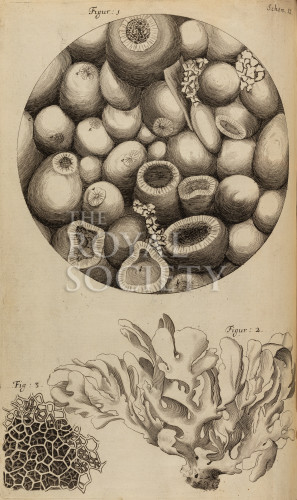 Image number: RS.1886
Credit: © The Royal Society
Looking for a special gift? Buy a print of this image.

Microscopic study of three specimens: Fig. 1. a sample of stone extracted from a quarry in Kettering, Northamptonshire [top]; Fig. 2. the fibres in a piece of sponge [bottom right], and; Fig. 3. an isolated section of seaweed [bottom left].

Written in the associated text: ‘It [the stone] is made up of an innumerable company of small bodies, not all of the same size or shape, but for the most part, not much differing from a Globular form, nor exceed they one another in diameter above three or four times; they appear to the eye, like the Cobb or Ovary of a Herring […]’

Plate 9 from Robert Hooke’s Micrographia: or some physiological descriptions of minute bodies made by magnifying glasses with observations and inquiries thereupon (1665), the first fully-illustrated book on the topic of microscopy. In the preface Hooke asserts that he had discovered ‘a new visible World’.