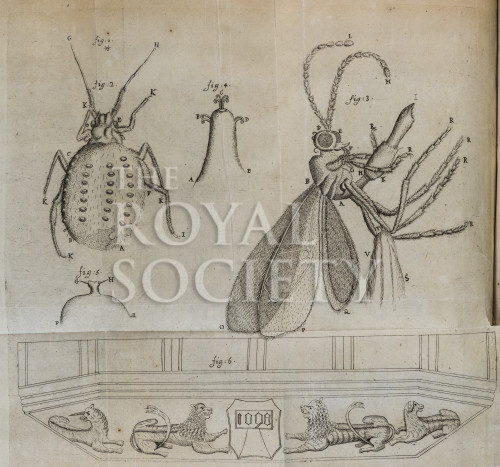 Six figures from issue 266 of Philosophical Transactions of the Royal Society.

Figures I-V. Various entomological studies, including of a louse, Phthiraptera, showing a specimen at its natural size (I) and as viewed under a microscope (II), a common housefly, Musca domestica (III) and detail views of the pupal case out of which the housefly emerges (IV, V). Illustrations to ‘II. A letter from Mr Anthony van Leuwenhoek, F. R. S. concerning some insects observed by him on fruit trees’ in Philosophical Transactions of the Royal Society, vol. 22, issue 266.

Original letter from Leeuwenhoek containing these images can be found in Early Letters of the Royal Society, EL/L3/23.

Figure VI. Inscription below a bay window in Colchester, showing a unicorn, two lions, a dog and a shield bearing the date ‘1090’. Illustration to ‘V. Part of letter of Dr. Jo. Wallis F. R. S. to the publisher, concerning the use of the numeral figures in England, in the year 1090’ in Philosophical Transactions of the Royal Society, vol. 22, issue 266.