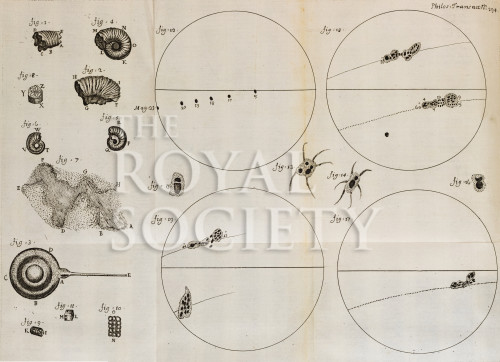 19 figures from issue 294 of Philosophical Transactions of the Royal Society.

Figures 1-11. Microscopic studies of petrified snail shells, collected in an unspecified mountain range in Switzerland, including: the shells in full (4, 5, 6), detail views of pieces of shell (1, 2), detail view of the surface of shell (7), part of an unidentified stone specimen (8), and; detail views of particles of the residue formed from boiling this unknown specimen in water (9, 10, 11), in a glass tube (3). Illustration to ‘A letter from Mr. Antony Van Leuwenhoek, F. R. S. concerning some fossils of Swisserland, &c’ in Philosophical Transactions of the Royal Society, vol. 24, issue 294 (December 1704).