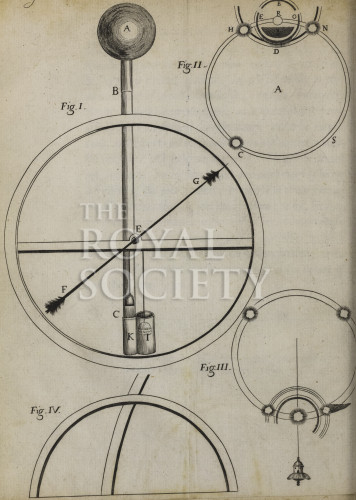 Four figures to issue 13 of the Philosophical Transactions of the Royal Society, including a wheel-barometer and meteorological phenomenon.

Fig I. Diagram of Robert Hooke’s design for a simple wheel-barometer, showing a large tube filled with quicksilver and smaller vessel of stagnant mercury attached to a dial with a single hand.

Fig II-IV Illustrations to An account of four suns, which very lately appear'd in France, and of two raine-bows, unusually posited, seen in the same kingdom, somewhat longer agoe, published in the Philosophical Transactions of the Royal Society, Vol. 1, issue 13 (4 June 1666) pp. 219-222.