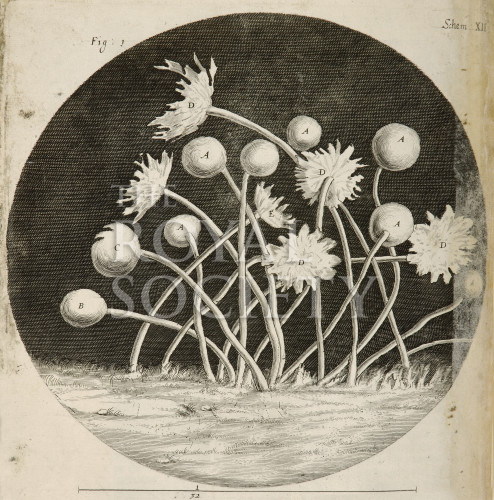 Image number: RS.5095
Credit: © The Royal Society
Looking for a special gift? Buy a print of this image.

Microscopic study of blue mould growing on leather. The specimen is framed in a circle, as it would appear if one was looking through a lens. In the associated text the author writes that this mould is ‘nothing else but several kinds of small and variously figur’d Mushrooms’.

Plate 12 from Robert Hooke’s Micrographia: or some physiological descriptions of minute bodies made by magnifying glasses with observations and inquiries thereupon (1665), the first fully-illustrated book on the topic of microscopy. In the preface Hooke asserts that he had discovered ‘a new visible World’.