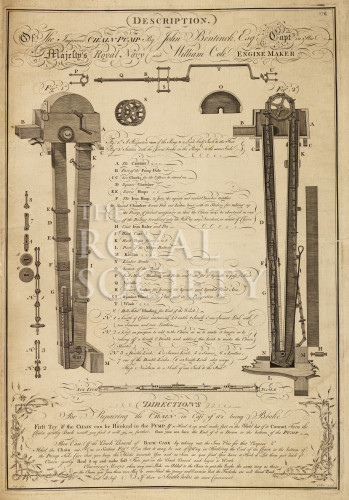 Image number: RS.5469
Credit: © The Royal Society
Looking for a special gift? Buy a print of this image.

A patent (no. 982) was granted for the design on 17 January 1771 for chain pumps for raising water out of ships. The 'Cole-Bentinck' pump was adopted for use in all Royal Navy ships.

The Royal Society John Smeaton collection consists of 6 volumes of his working drawings.

The drawings (with supplementary manuscripts and engravings) were classified by mechanical engineer, John Farey (1791-1851) under the following 6 headings: I. Windmills and watermills for grinding corn; II. Mills for various purposes and machines for raising water; III. Fire engines for raising water; IV. Bridges and Buildings; V. Canal works, sluices, and harbours; VI. Canals and river navigations.

Smeaton made all his drawings himself. Later in his career he employed a draughtsman, but still continued to draw the lines of all his drawings to the proper scale in pencil on cartridge paper which he called sketches. Fair copies of the sketches were then made on drawing paper by the draughtsman, William Jessop or his successor Henry Eastburn, and Smeaton's daughters frequently helped in the shadowing and finishing using ink wash.