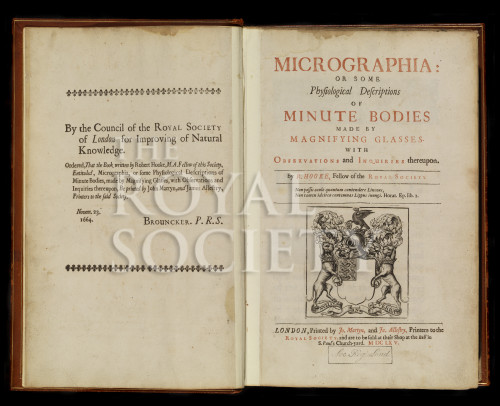 Image number: RS.6108
Credit: © The Royal Society
Looking for a special gift? Buy a print of this image.

Imprimatur and title page of Micrographia: or some physiological descriptions of minute bodies made by magnifying glasses with observations and inquiries thereupon, by Robert Hooke (London, 1665).

The imprimatur [left page as viewed] identifies that the printing of the book was ordered by Council of the Royal Society and authorised by the then president, William Brouncker, 2nd Viscount Brouncker (1620–1684).

The engraving on the lower-half of the title page [right] depicts the coat of arms of the Royal Society, which comprises a shield argent featuring the Three Lions of England, two white hounds gorged with crowns, a peer's helmet and an eagle holding a smaller shield. The society's motto, 'Nullius in verba', frames the bottom. The inscription below identifies the printers of the book, John Martyn and James Allestry, two early printers to the Royal Society.