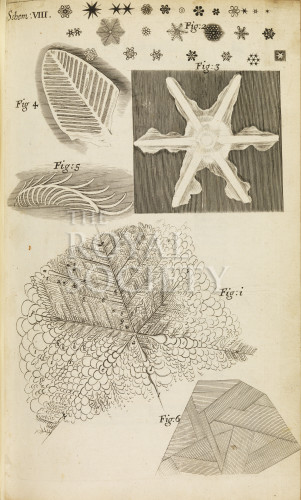 Image number: RS.6238
Credit: © The Royal Society
Looking for a special gift? Buy a print of this image.

Microscopic study of a number of frozen materials, including Fig. 1. frozen urine; Fig. 2/3. snowflakes, and; Fig. 4/5/6 flakes of ice.

Written in the associated text: ‘I have very often in a Morning, when there has been a great hoar-frost, with an indifferently magnifying microscope, observ’d the small stirie, or Crystalline beard, which then usually covers the face of most bodies that lie open to the cold air, and found them to be generally Hexangular prismatical bodies’

Plate 8 from Robert Hooke’s Micrographia: or some physiological descriptions of minute bodies made by magnifying glasses with observations and inquiries thereupon (1665), the first fully-illustrated book on the topic of microscopy. In the preface Hooke asserts that he had discovered ‘a new visible World’.