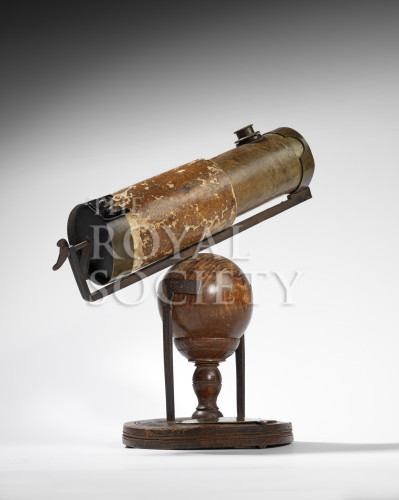 Image number: RS.8461
Credit: © The Royal Society
Looking for a special gift? Buy a print of this image.

Reflecting telescope seen from behind, comprising two tubes, one sliding inside the other to focus the mirrors, and two eyepiece holes. The upper tube is covered with a layer of decorative vellum. Their insides have been painted black. Mounted on a wooden ball with a turned stem and circular base.

Brass plaque on base engraved: ‘THE FIRST REFLECTING TELESCOPE INUENTED BI Sr ISAAC NEWTON AND MADE WITH HIS OWN HANDS IN THE YEAR 1671’

Sir Isaac Newton (1643-1727) British natural philosopher and mathematician, was elected a Fellow of the Royal Society in 1672 and served as President from 1703 to 1727. Newton built his first reflecting telescope in 1668, this is his second model.

Newton's telescope was first shown at the Royal Society in 1671, where it remained on an informal, permanent loan basis. At some point post-1700 (exact date unknown) it was misplaced or deposited elsewhere. Many of the Society's museum objects met the same fate in the 1700s; a result of the Society's inadequate on-site storage conditions.

The telescope was presented to the Society in 1766 by the antiquarian George Scott FRS on behalf of Heath and Wing, a firm of scientific instrument makers in the Strand, London, who affirmed that it was the same model made by and formerly belonged to Sir Isaac Newton. (Tracts 844/12, ‘An account of The Royal Society's NEWTON telescope’ by A.R. Hall and A.D.C. Simpson).