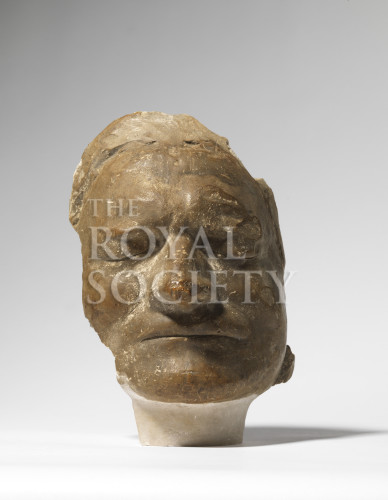 Image number: RS.8492
Credit: © The Royal Society
Looking for a special gift? Buy a print of this image.

Full face view of the death mask of Isaac Newton. With eyes and mouth closed, and chips along the outter edge, particularly the top right [as viewed] and bottom left corners.

This death mask is one of several prepared shortly after Newton’s death, likely by the artist Michael Rysbrack. Rysbrack used the likeness to sculpt Newton’s features in marble for his tomb at Westminster Abbey. This mask was owned by the 18th century French sculptor Louis-François Roubiliac, who carved a marble bust of Newton (now at Trinity College Cambridge).