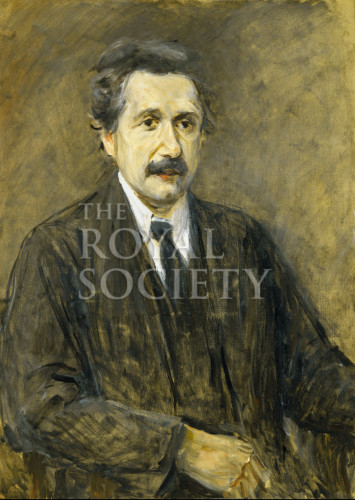 Image number: RS.9246
Credit: © The Royal Society
Looking for a special gift? Buy a print of this image.

The painting shows the scientist during the earliest period of his worldwide fame, following the Eddington-Dyson 1919 eclipse expedition which produced confirmation of relativity theory and the award of the 1921 Nobel Prize for Physics.

Albert Einstein was elected a Foreign Member of the Royal Society in 1921.

The portrait was originally owned by Martha Liebermann, the artist’s widow and shown at the anti-Nazi ‘Exhibition of twentieth century German art’ at the new Burlington Galleries from July 1938. Under the headline: ‘Einstein portrait sought: Britons fear it will be destroyed if returned to Reich’, The New York Times reported by wire from London that “There is every hope that Max Liebermann’s portrait of Professor Albert Einstein…will be purchased here and so prevented from going to Germany where it would stand a good chance of being destroyed.” [The New York Times, Thursday 25 August 1938, p.8.].

Time Magazine’s article, ‘Thirty Years’ War’ gave further background information: “Last week in London memories of that period were powerfully stirred by an exhibition of 20th Century German Art at the New Burlington Galleries…shown was the work of mild, good-natured Max Liebermann, who died three years ago after his work was banned, not because it was abstract, but because he was Jewish.” [Time Magazine, Monday 18 July 1938].

A correspondence instigated by Herbert Edward Read (1893-1968) with the then Royal Society President Sir William Henry Bragg (1862-1942) dates the painting and opened the way for the Society to acquire it. Read said that “The recent Exhibition…included a portrait in oils of Professor Einstein by Max Liebermann, painted in 1922…A fund has been opened to purchase the picture…”. Contributions for most of the sum required were made by: Sir Victor Sassoon (1881-1961), Mrs M Sassoon, Dudley Joel M.P., Mrs A.H.Jessel and two anonymous donors. [Royal Society Modern Domestic Archives MDA/G3/1, correspondence 22 September 1938-26 February 1939, 19 items.]

The Society’s Officers recommended buying the painting by payment of the residue (then £100 from a total of £350). It was first intended that the Royal Society should make up the remainder by approaching ‘Professor Einstein’s supporters’ in England. However one, Dr Redcliffe Nathan Salaman FRS (1874-1955) wrote to say that “I had a private letter from the President asking me not to take further notice of his request in view of the fact that he had only just learned of the appalling disaster which had overcome Jewry by reason of the German outrages [Kristallnacht, 9-10 November 1938], and he did not wish even so honorary a burden as this to be thrust upon them.” [Royal Society Modern Domestic Archives MDA/G3/1, correspondence 22 September 1938-26 February 1939, 19 items].

The Royal Society’s Council Minutes state in February 1939 that: “That the sum of £75 outstanding on the purchase price of the oil painting of Professor A. Einstein by Max Liebermann be provided from the General Purposes Account, in order to enable the Royal Society to acquire the portrait.” [Royal Society Minutes of Council, 16 February 1939, vol.15, 1936-1940 p.199].