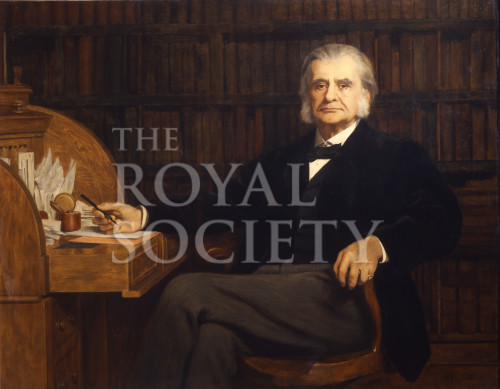 Image number: RS.9286
Credit: © The Royal Society
Looking for a special gift? Buy a print of this image.

Huxley is seated at three-quarter length, left hand (with signet ring) gripping one arm of a wooden chair. His right hand rests on the flat surface of an open roll-top writing desk (left of picture as viewed) holding a steel pen. On the desk is an ink well, with loose and filed papers. Bookshelves can be seen behind both sitter and desk. Huxley grey-haired and clean-shaven except for side whiskers. He is painted wearing a black coat and waistcoat over grey trousers, with a white shirt and black bow tie.

Posed in similar style to the William Kingdon Clifford portrait by Collier in the Society’s collections, although Huxley adopts a more open, relaxed, posture.

This picture was on loan to the Royal Society from 1972 before and being valued by Christie’s in 1981 and offered for sale. It was purchased for £5,028.75 from William Collier. [Letter, Norman Robinson, Librarian, 7 August 1981, to William Collier, 34 Berwyn Road, Richmond, Surrey [with valuation, on provenance file]. Royal Society funding came from Dewrance, Donation and Jodrell Fund.

The artist John Collier was the son-in-law of Thomas Henry Huxley, whom he painted. Collier was thus able to paint the scientific elite of the late 19th century especially of the Darwin-Huxley circle. In addition to Huxley, the Society has portraits by Collier of: William Kingdon Clifford, Michael Foster, Joseph Dalton Hooker, William Huggins, James Prescott Joule and William Spottiswoode with one painting of Charles Darwin after Collier’s original.