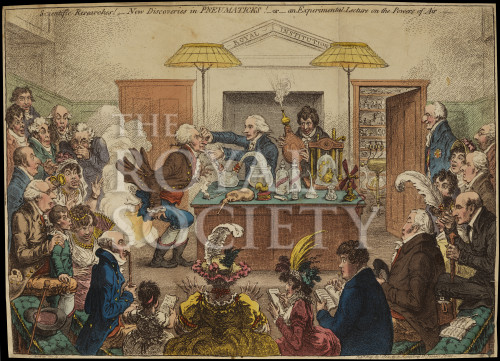 Image number: RS.9323
Credit: © The Royal Society
Looking for a special gift? Buy a print of this image.

The print is inscribed above: “Scientific Researches! – New Discoveries in PNEUMATICS! – or – an Experimental Lecture on the Power of Air.-“ On the central table, where the experiment is being conducted, are various retorts and items of scientific apparatus, including jars marked “Oxygen” and “Hydrogen”, an air-pump containing a frog in a glass bell-jar, and a clay pipe burning tobacco. More equipment is visible through a door at the rear of the theatre. The audience includes women and children and on the lower right is an open notebook inscribed: “Hints on the Nature of air requir’d for the new French Diving Boat”.

Print from Charles Richard Weld's 2 volume A history of the Royal Society... (London, John W. Parker, 1848) grangerized by the writer and collector Alexander Meyrick Broadley (1847–1916) into 8 volumes, adding illustrative material and manuscript items to Weld's text. The books were initially owned by Ludwig Mond FRS (1839–1909), and according to an inscription by his son Robert Ludwig Mond FRS (1867–1938) they were intended for presentation to the Society. This eventually happened in late 1959, the donor being the politician Harry Nathan (1889–1963), Lord Nathan of Churt.