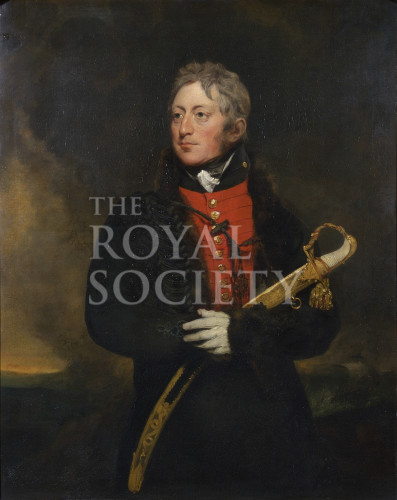 Image number: RS.9349
Credit: © The Royal Society
Looking for a special gift? Buy a print of this image.

Manby is painted standing at three-quarter length in military uniform (Manby was Captain in the Cambridgeshire militia) holding a highly decorated [prize?] sabre. Behind, a maritime scene of a vessel in stormy seas, in reference to Manby’s invention of a life saving mortar for use in shipwrecks.

George Manby was elected a Fellow of the Royal Society in 1831.

The portrait is described as by Sir Thomas Lawrence in Robinson’s catalogue of portraits, following the donation record in Council Minutes. However, contemporary engravings identify the original artist as Samuel Lane. [For example the stipple engraving produced for the European Magazine by T.Blood, NPG D16709 and the same image in the Royal Society’s collections].

The gift is recorded thus: “Read a letter from the Secretary to H.M.Embassy at Paris, informing the Society of a bequest by Georgina Manvers Manby, widow of the late M.T.A.Barrot, of a portrait by Lawrence of Captain George Manby, F.R.S., and stating that the heirs were prepared to deliver the portrait to the Society upon being reimbursed the amount of succession duties which had been paid to the French Treasury...” [Royal Society Minutes of Council, Printed, volume 8, 1914-1920, 5 July 1900, p.143]. It was reported subsequently that “the portrait of the late Captain Manby has been handed over...to an advocate in Paris, who has been requested to despatch it to London.” [ibid., 25 October 1900, p.155]. It was reported as received at the Council meeting of 21 February 1901. [ibid., 21 February 1901, p.190].