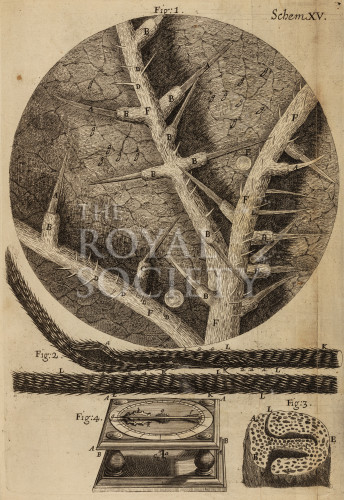 Image number: RS.9437
Credit: © The Royal Society
Looking for a special gift? Buy a print of this image.

Written in the associated text: ‘A Nettle is a Plant so well known to everyone, as to what the appearance of it is to the naked eye, that it needs no description; and there are very few that have not felt as well as seen it […] And here we must recourse to our Microscope, and that will, if almost any part of the Plant be looked on, shew us the whole surface of it very thick set with turn-Pikes, or sharp Needles, of the shape of those represented in the 15 Scheme’

Also in the associated text: ‘But the use that has been made of it [the beard of an oat], for the discovery of the various constitutions of the Air, as to driness and moistness, is incomparably beyond any other…Provide a good large Box of Ivory, about four Inches over…let all the sides of this Boc be turned of Basket-work…the more holes are, the better, that so the Air may have the more free passage to the inclosed Beard…after the manner represented in the 4. Figure of the 15. Scheme.’

Plate 15 from Robert Hooke’s Micrographia: or some physiological descriptions of minute bodies made by magnifying glasses with observations and inquiries thereupon (1665), the first fully-illustrated book on the topic of microscopy. In the preface Hooke asserts that he had discovered ‘a new visible World’.