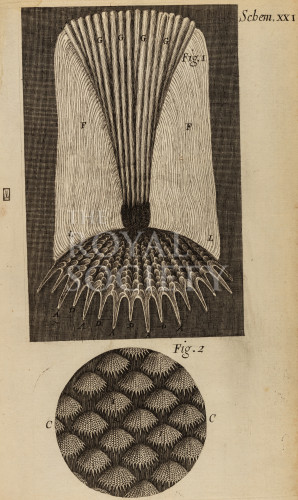 Image number: RS.9441
Credit: © The Royal Society
Looking for a special gift? Buy a print of this image.

Microscopic study of the scales of a sole, namely, a single scale (Fig 1. top) and a detail further magnified (Fig 2. bottom).

Written in the associated text: ‘The outside of it, to the naked eye, exhibited nothing more of ornament, save the usual order of ranging the scales into a triagonal form, onely the edges seem’d a little to shine…But through an ordinary Magnifying glass, it exhibited a most curiously carved and adorned surface, such as is visible in the second Figure’

Plate 21 from Robert Hooke’s Micrographia: or some physiological descriptions of minute bodies made by magnifying glasses with observations and inquiries thereupon (1665), the first fully-illustrated book on the topic of microscopy. In the preface Hooke asserts that he had discovered ‘a new visible World’.