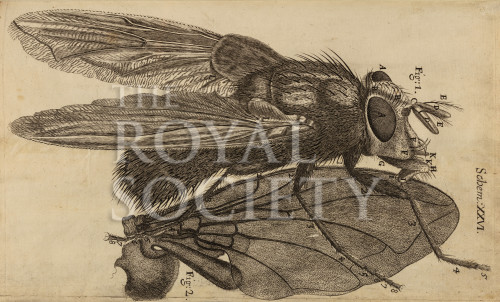 Image number: RS.9445
Credit: © The Royal Society
Looking for a special gift? Buy a print of this image.

Microscopic study of a blue bottle fly calliphora vomitoria, providing a sectional view of its head, showing the compound eyes, antenna and mouth, its thorax and wings, its abdomen and its legs.

Written in the associated text: ‘All the hinder part of its body is cover’d with a most curious blue shining armour, lookinh exactly like a polish’d piece of steel brought to that blue colour by annealing, all which armour is v ery thick bestuck with abundance of tapering bristles, such as grow on its back, as is visible enough by the Figure.’

Plate 26 from Robert Hooke’s Micrographia: or some physiological descriptions of minute bodies made by magnifying glasses with observations and inquiries thereupon (1665), the first fully-illustrated book on the topic of microscopy. In the preface Hooke asserts that he had discovered ‘a new visible World’.