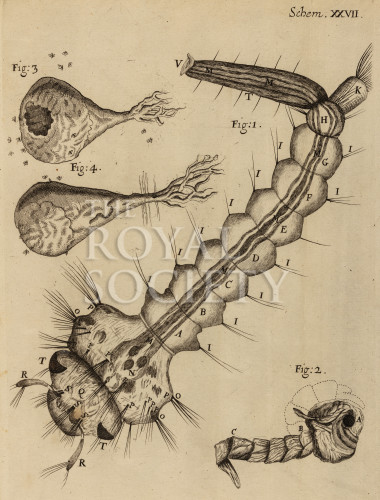 Image number: RS.9446
Credit: © The Royal Society
Looking for a special gift? Buy a print of this image.

Microscopic study of water-dwelling larvae. Fig. 1. provides a plan view of the specimen, showing its head, eyes, antenna, abdomen and cercus; Fig. 2. shows the specimen at an earlier development stage, and; Fig. 3/4 show similar specimens as found in Brasil and described by Guliemus Piso.

Plate 27 from Robert Hooke’s Micrographia: or some physiological descriptions of minute bodies made by magnifying glasses with observations and inquiries thereupon (1665), the first fully-illustrated book on the topic of microscopy. In the preface Hooke asserts that he had discovered ‘a new visible World’.