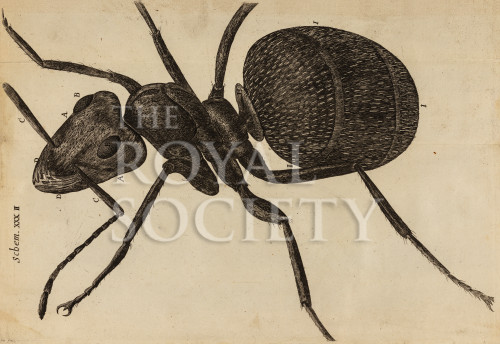 Image number: RS.9451
Credit: © The Royal Society
Looking for a special gift? Buy a print of this image.

Written in the associated text: ‘it had a large head AA, at the upper end of which were two protuberant eyes, pearl’d like those of a Fly, but smaller BB; out of the Nose or foremost part, issued two horns CC…beyond these were two indented jaws DD, which he open’d side-wayes’

Plate 32 from Robert Hooke’s Micrographia: or some physiological descriptions of minute bodies made by magnifying glasses with observations and inquiries thereupon (1665), the first fully-illustrated book on the topic of microscopy. In the preface Hooke asserts that he had discovered ‘a new visible World’.