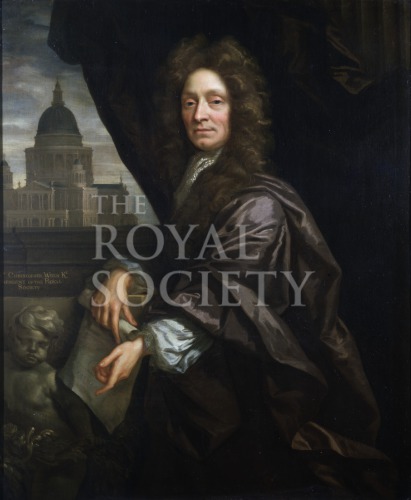 Image number: RS.9545
Credit: © The Royal Society
Looking for a special gift? Buy a print of this image.

This lively portrait shows Wren at three-quarter length, wigged, and dressed in a white shirt and lace cravat over which is a loose brown robe. He holds a partly rolled sheet of paper in his right hand and points with his left. A marble statue of a child, or putto, with acanthus leaves is by the paper. Behind, revealed by a curtain, is St. Paul’s Cathedral, London.

Christopher Wren was elected a Fellow of the Royal Society in 1660, he served as its President from 1680 to 1682. Wren was a founder of the Society.