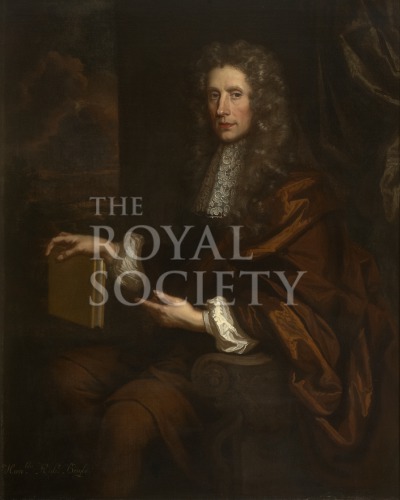 Image number: RS.9547
Credit: © The Royal Society
Looking for a special gift? Buy a print of this image.

Three quarter length portrait, seated, the sitter’s body turned to the viewer’s left. Robert Boyle wears a long curled wig with brown robe over brown coat and stockings, with a white shirt and lace neck-cloth. His left hand indicates a book, held upright by the spine in his right hand. Drapery behind and to the right as viewed, with a landscape visible to the left.

Robert Boyle was elected a Fellow of the Royal Society in 1660, he was a founder of the Society.

The Riley portrait of Robert Boyle is discussed by Maddison [The painting and its provenance is described in the article “The portraiture of the Honourable Robert Boyle” by R.E.W.Maddison, Annals of Science, 15 (1959), pp.141-214], while Michael Hunter considers the work as being similar in date to Kerseboom’s and as part of the same programme of ensuring Boyle’s legacy [Boyle: between God and science, by Michael Hunter (Yale, 2009), p.228].

The bequest is noted in Council Minutes and the portrait had been received by December 1875: “The Treasurer reported that he had received from the Executors of the late Sir Charles Wheatstone, in accordance with the terms of his Will, a Portrait in oil of the Hon.Robert Boyle, by Kneller; a Portrait in oil of Sir C.Wheatstone, by C.Martin; and nineteen framed lithographic and photographic portraits of scientific men.” [Royal Society Minutes of Council, Printed, CMP/4, 1870-1877, p.295 meeting of 16 December 1875]. The Society retains the original correspondence surrounding the bequest [Royal Society, Miscellaneous Correspondence MC/10/303, 314, 318, 391].

The Society’s portrait of Charles Wheatstone, by Charles Martin, formed part of the same bequest.