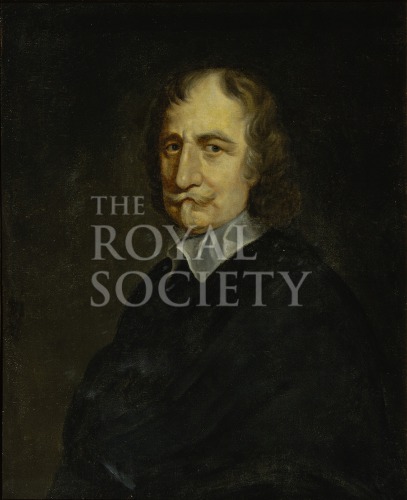 Image number: RS.9549
Credit: © The Royal Society
Looking for a special gift? Buy a print of this image.

A half length portrait depicting Hobbes in a black robe with a white collar. The background is dark, and Hobbes is turned toward the viewer’s left, his gaze is directed at the viewer. Hobbes is shown with long natural hair, greying and thin at the top, and a small white beard and moustache.

Thomas Hobbes (1588-1679) British philosopher was not a Fellow of the Royal Society. He had close ties with the Society's founder, King Charles II (1630-1685), having studied mathematics with him.

William Dobson (1611-1646) the younger, son of the painter and namesake William Dobson the elder, studied under painters Francis Clein and Robert Peake. He was most active in the final six years of his life, when he is believed to have painted this portrait.

The donation of this and two other portraits is recorded in the Society’s Journal Book: “The will of Dr. Thomas Paget was produced by which the Dr. has bequeathed to the Royal Society two houses in Coleman Street London, now lett for 97:10 per annum as also three pictures; Viz. of Gassendus, T. Hobbs and Dr. Henry Moor. The President was pleased to undertake to ask of the executor the Deeds of the Estate.” [Royal Society Journal Book, Original, (JBO/12) 1714-1720, p.181, meeting of 17 October 1717].