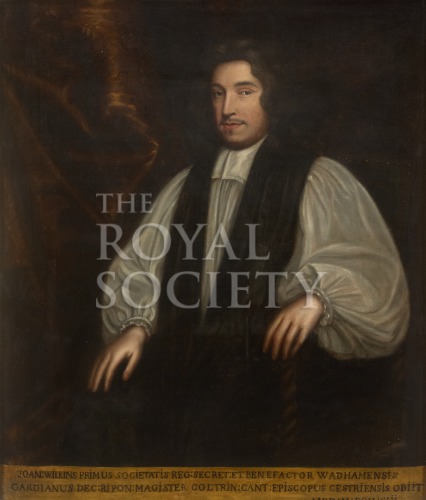 Image number: RS.9651
Credit: ©The Royal Society
Looking for a special gift? Buy a print of this image.

John Wilkins is painted at three-quarter length, seated, in ecclesiastical dress, a black tippet over a white surplice. He has dark natural hair, shoulder length and a narrow moustache. The left hand rests on the arm of his chair; the right loosely on his knee.

John Wilkins was elected a Fellow of the Royal Society in 1660, he was a founder of the Society.

The picture appears to have been in the Society’s possession by January 1677 when “Mr.Hunt was ordered to take a coppy of the picture of the late Lord Bp. of Chester, Dr. Wilkins.” [Royal Society Council Minutes, Original, CMO/1, meeting of 25 January 1677]. This suggests that it, since Wilkins died in 1672, it may well have been bequeathed to the Society. Certainly, by late 1672 the Society was investigating Wilkins will: “The Amanuensis was commanded to go to the Prerogative Court, and to copy out of the late Bsp. of Chester’s last will what the legacy is, which he hath bequeathed to the Royal Society.” [Royal Society Council Minutes, Original, CMO/1, meeting of 18 December 1672]. Council later noted the receipt of money, but not this picture. [Royal Society Council Minutes, Original, CMO/1, meeting of 27 November 1673].