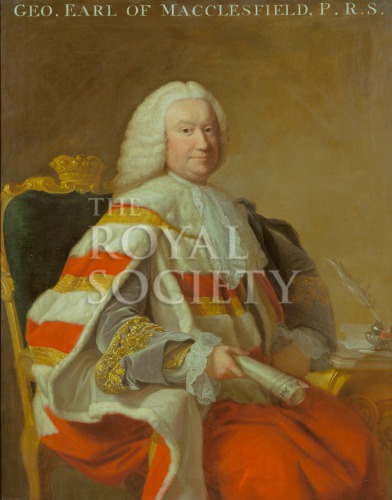 Image number: RS.9663
Credit: ©The Royal Society
Looking for a special gift? Buy a print of this image.

Three-quarter length portrait of Macclesfield, dressed in a grey, heavily brocaded coat over which he wears red and ermine robes, showing a lace collar and cuffs. Macclesfield is seated on a gilded chair with green upholstery surmounted by a coronet. To the viewer’s right is a table upon which rests a silver inkwell in the shape of a shell. This contains red sealing wax, with a quill pen in one of two glass bottles and a loose letter behind, the address leaf partially visible. Macclesfield holds a roll of paper in his right hand.

In Council Minutes: “The President informed the Council, that as most of his Predecessors had given their Pictures to the Society, he had desired his own to be sent to their House as soon as finished, For which the Council returned his Lordship their Thanks“ [1Royal Society Council Minutes, Original, CMO/4, meeting of 17 October 1754, p.145].