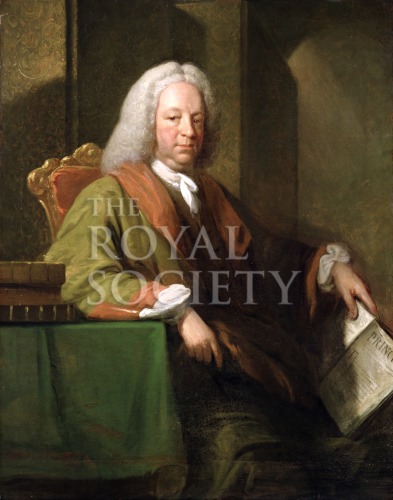 Image number: RS.9681
Credit: ©The Royal Society
Looking for a special gift? Buy a print of this image.

Three-quarter length portrait of James Jurin, seated on a red chair with ornate gilded surround. Jurin rests his right arm on a table covered with a green cloth upon which is a pile of three books, the central volume inscribed “J.Jurin M.D.” Jurin holds an open edition of Sir Isaac Newton’s Principia Mathematica in his left hand. He is dressed in a grey shoulder-length wig, brown waistcoat and white neck-cloth over which is a green robe with red at the collars and cuffs. Behind the sitter are screens decorated in green and gold with sunlight slanting into the painting.

Jurin was elected a Fellow of the Royal Society in 1717.

The donation is recorded in Council Minutes: “A letter was read from the Rev. Charles William Knyvett presenting, on behalf of his nephew, a Portrait of Dr. James Jurin, who was Secretary of the Royal Society from 1721 to 1727, and from whom the Donor is descended. Resolved That the thanks of the President and Council be returned for this valuable addition to the Society’s collection of Portraits.“ [Royal Society Council Minutes, Original, CMO/14, meeting of 29 October 1868].