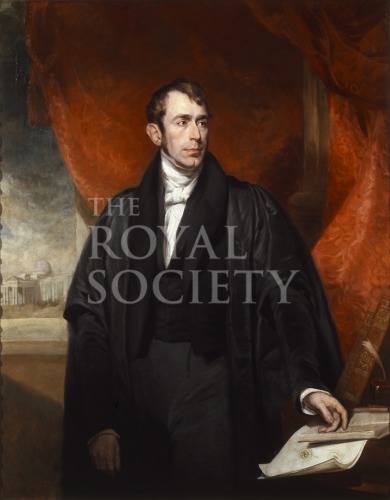 Half-length portrait of Sir George Biddell Airy, standing before a landscape with the Cambridge University Observatory buildings. Also behind is a patterned red hanging and an architectural pillar. Airy is dressed in a black jacket and waistcoat with grey trousers and a white high-collared shirt and tie. On a desk or table to the right as viewed are two large half-upright leather-bound volumes and an inkwell holding a quill pen. Airy rests his left hand on an open book. A sheaf of papers beneath this is visible with two coloured figures.

On permanent loan from the University of Cambridge.