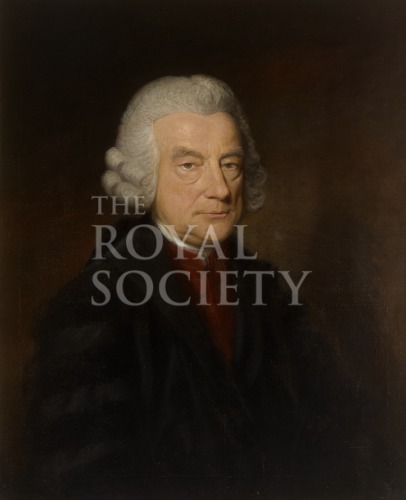 Image number: RS.9719
Credit: ©The Royal Society
Looking for a special gift? Buy a print of this image.

Head and shoulders portrait of Sir William Watson wearing a short white wig with a black ribbon visible behind, tied with a queue. Watson’s head and body are turned slightly to the viewer’s right. He wears a dark coat over a red high necked waistcoat and white neck cloth.

William Watson was elected a Fellow of the Royal Society in 1741.

By the time of the Robinson and Forbes catalogue, this work was considered to have been presented by the sitter. [The Royal Society catalogue of portraits by Norman H. Robinson with biographical notes by Eric G. Forbes (London, 1980) p.318]. However, earlier catalogues note the donor’s name only and this was the sitter’s son, Sir William Watson (1744-1824), also a Fellow of the Royal Society. The donation is recorded in the annual printed lists of presents as: “A Portrait of the late Sir William Watson, Knt. M.D. V.P.R.S. painted by Abbot.” [“Presents made to the Royal Society From November 1788 to June 1789; with the names of the donors”, Philosophical Transactions of the Royal Society, vol.79 (1789), p.319].

According to Constance Lubbock [Letter, William Watson, 25 December 1784, to William Herschel, quoted in The Herschel chronicle: the life story of William Herschel and his sister...edited by Constance Anne Lubbock (CUP, 1933), pp.181-182] William Watson junior encouraged his friend, Sir William Herschel FRS (1738-1822) to sit for Lemuel Abbott in 1785, having himself been painted by Abbott in 1784. The resulting portrait of Herschel is now in the National Portrait Gallery (NPG 98). If the younger Watson also commissioned the painting of his father, it may date from around that time.