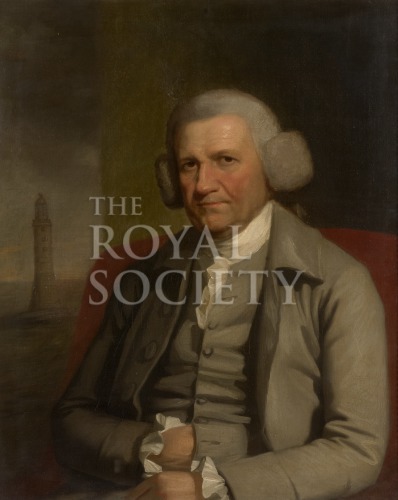 Image number: RS.9720
Credit: ©The Royal Society
Looking for a special gift? Buy a print of this image.

Half-length portrait of John Smeaton dressed in a grey suit with white shirt and neck-cloth and a short grey wig. Smeaton is shown seated on a red chair, his right hand tucked into his waistcoat. Behind is a view of the Eddystone lighthouse.

John Smeaton was elected a Fellow of the Royal Society in 1753.

A letter sent at the time of donation has been preserved in the Society’s archives: “I beg leave to present to the Royal Society a Picture of my late much esteemed Friend Mr. John Smeaton, Civil Engineer and Fellow of the Society, whose memory will ever be dear to all Lovers of Science & particularly to those who were acquainted with him it was painted by Mr.Mather Brown a few years before his death & is allowed to be a striking resemblance of him...“ [Letter, Alexander Aubert, 7 November 1799, to Sir Joseph Banks, Royal Society Letters, RSL/3/3].