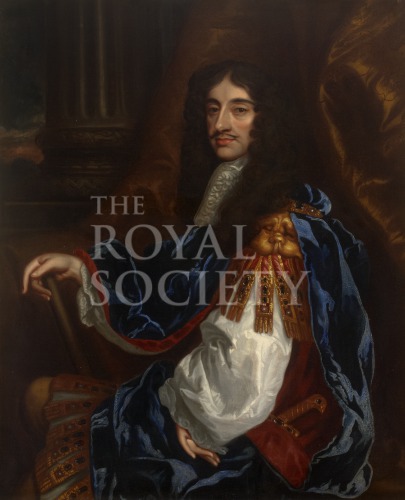 Image number: RS.9724
Credit: ©The Royal Society
Looking for a special gift? Buy a print of this image.

Three-quarter length seated portrait of Charles II, the Royal Society’s first patron. Charles is posed almost side-on as viewed, his head turned in a quarter profile. His left hand, in the foreground as viewed, is on his hip, the right hand holds an upright cane or baton. The King wears a white shirt with bell sleeves and lace cuffs with a matching white lace cravat. Over this a gold tabard with fringed and jewelled skirt and shoulder sections, the latter in the shape of a lion’s head. Charles wears a blue velvet cloak with a red lining secured at the left shoulder by a gold clasp set with sapphires. At his left hip is a sword with a jewelled guard, the handle and pommel in the shape of a bird’s head. Charles has a shoulder length black wig and a narrow moustache. Behind is a hanging of bronze fabric, revealing to the right as viewed a fluted architectural pillar.

Charles II was the Royal patron and founder of the Royal Society.

In his summary essay on the Society’s collection, Edward Neville Da Costa Andrade FRS (1887-1971) stated that: “To Lely is somewhat doubtfully attributed the portrait of Charles II, Founder of the Society, which hangs over the President’s chair. Contrary to the usual belief, the portrait did not come into the Society’s possession at, or near, the time of the foundation. It belonged to the Marquis of Hastings [Francis Edward Rawdon-Hastings, 1st Marquess of Hastings (1754-1826)], who died in 1826, and was acquired after his death.” [“The Royal Society portraits”, E,N. Da C.Andrade, Endeavour, vol.15, no.59, pp.128-136].