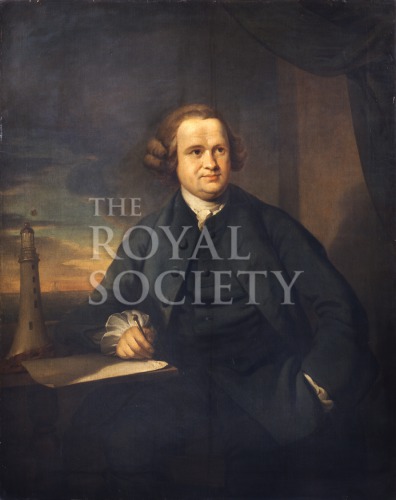 Image number: RS.9739
Credit: ©The Royal Society
Looking for a special gift? Buy a print of this image.

Half-length portrait of John Smeaton seated at a writing table, dressed in a black coat, trousers and waistcoat, with a white shirt and neck-cloth. Smeaton wears a short brown wig and is posed with his left hand in his pocket, the right hand poised over a sheet of paper and holding a brass pen. Above and to the right as viewed are a curtain and architectural column. To the left as viewed, the Eddystone lighthouse with a ship on the horizon and a black smudge, possibly a signal rocket.

John Smeaton was elected a Fellow of the Royal Society in 1753.

The portrait has been subject to some confusion, with early printed catalogues attributing the work to Jonathan Richardson, and the donation from Alexander Aubert, who donated the Mather Brown portrait of John Smeaton. [Originally in Portraits in the possession of the Royal Society (London, Royal Society, November 1834) and continued in the Descriptive catalogue of the portraits in the possession of the Royal Society, by Charles Richard Weld (Taylor and Francis, London, 1860), p.60]. The problem was compounded in Robinson & Forbes, where the captions were switched between the two pictures. [The Royal Society catalogue of portraits by Norman H. Robinson with biographical notes by Eric G. Forbes (London, 1980) pp.276-279].

The attribution to Jonathan Richardson the younger (1694-1771) is possible, but seems unlikely. One candidate artist would be the Leeds-born Benjamin Wilson (1721-1788), who was well-known in scientific circles of the period and a friend and correspondent of Smeaton’s. A.W.Skempton notes from surviving correspondence between the two men in the British Library that Wilson sent paintings to Smeaton from London in 1764 including, apparently, a portrait painted in 1759. [Letter of 17 April 1764, quoted in John Smeaton FRS, edited by A.W.Skempton (Thomas Telford Press, London, 1981), p.21].