Figures I-II. Geometric diagrams illustrating Abraham de Moivre’s interpretation of the Lune of Hippocrates. Illustrations to ‘III. The dimension of the solids generated by the conversion of Hipppocrates's Lunula, and of its parts about several axes, with the surfaces generated by that conversion, by Ab. De Moivre, F. R. S’ in Philosophical Transactions of the Royal Society, vol. 22, issue 265 (August 1700).

Figure III. Astronomical chart depicting the phases of a lunar eclipse, as observed by Johann Philipp von Wurzelbauer from Nuremberg, November 1699. Illustration to ‘II. A letter sent to the publisher of these transactions, concerning an abstract of some observations made of the Eclipse of the Sun, September 13,1699’ in Philosophical Transactions of the Royal Society, vol. 22, issue 265 (August 1700). Original proof of this image can be found in MS/131/118, p.134. 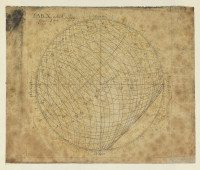