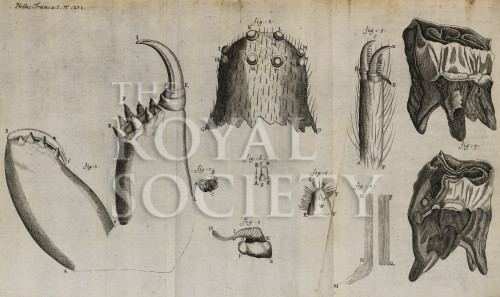 Nine figures from issue 272 of Philosophical Transactions of the Royal Society.

Figures I-VIII. Microscopic studies of the anatomy of a spider, including: part of a spider’s leg, with claws (I), the carapace (II), the sting, with claw (III), thread (IV), spinneret (V, VI), a spider on its back (VII) and the abdomen and hook (VIII). Illustrations to ‘II. A letter from Mr Anthony van Leeuwenhoek, F. R. S. Concerning spiders, their way of killing their prey, spinning their webbs, generation, &c’ in Philosophical Transactions of the Royal Society, vol. 22, issue 272 (July 1701).

Original letter from Leeuwenhoek containing these images can be found in Early Letters of the Royal Society, EL/L3/29.

Figures IX. Two teeth, excavated from Chartham, near Canterbury, England, said to be ‘the size […] of a mans fist’. Illustration to ‘III. Chartham news: or a brief relation of some strange bones there lately digged up, in some grounds of Mr John Somner’s in Canterbury’ in Philosophical Transactions of the Royal Society, vol. 22, issue 272 (July 1701).