John Flamsteed was elected a Fellow of the Royal Society in 1677.

Transcription
John Flamsteed A.R. F.R.S
Object history
Presented by James Hodgson, 1732; bequeathed by Mrs Margaret Flamsteed (along with the Society’s portrait of Tycho Brahe; both were owned by John Flamsteed).

The donation of this painting is noted in the Society’s Journal Book: “Mr Hodgson presented the Society with the Picture of Tycho Brahe, and of the Revd. Mr Flamsteed late Regius Professor of Astronomy at Greenwich: and the Pictures were given to Mr Hauksbee, to get them hung up in the most convenient place.” [Royal Society Journal Book Original, JBO/15 p.185 meeting of 23 November 1732].

The circumstances behind this presentation are explained by Mrs Flamsteed’s will: “Item. I give to the Royall Society in Crane-court, Fleet Street, London, an Original Picture of the late Mr John Flamsteed, at half-length, drawn by Mr Murry, and also give a Picture of Tycho Brahe, a three-quarters length, with each of their respective frames, to be placed where the Pictures of Mr. Boyle and other persons of that learned Society are fixed.” [Quoted in a letter, Colin A Ronan, 9 December 1978, to Norman Robinson. In the Royal Society provenance file for the portrait of Tycho Brahe]. James Hodgson (1678?-1755) married Ann Heming, the Flamsteeds’ niece and subsequently donated objects belonging to Flamsteed to the Royal Society. 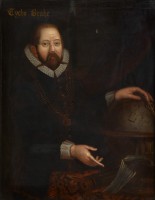