Date
ca. 1620s
Sitter
Tycho Brahe (1546 - 1601, Danish) , Astronomer
Creator
Unknown, Artist
Object type
portrait
painting
Archive reference number
P/0014
Material
oil
canvas
Dimensions
height (painting): 1056mm
width (painting): 826mm
Subject
Astronomy
Content object
scientific environment & equipment
Description
Half length portrait showing Tycho Brahe at full face, with thinning dark hair and a full beard with long moustaches. He wears a prosthetic nose [his real nose was cut off in a duel]. Brahe’s face is bordered by a white ruff collar and he is dressed in a dark coat with gold buttons. He wears a triple gold chain from which hangs a medallion with a classical head in profile. His left hand rests on a celestial globe showing a cartouche [not legible] and the constellations of Canis major, Gemini and Orion. In front of the sitter is a table with a patterned gold cloth upon which rests dividers, a telescope and an open book, towards which Brahe points with his right hand, index finger extended. More volumes are visible beneath the globe, one with a metal clasp.

The circumstances behind the painting of this portrait are not known. The work has been attributed previously, and with no obvious evidence, to the Dutch painter Michiel Jannsz van Miereveld (1567-1641). [For example in Charles Richard Weld’s Descriptive catalogue of the portraits in the possession of the Royal Society (London, Taylor and Francis, 1860), p.9]. The telescope tends to suggest that this is painting is not a lifetime work: there is some evidence for knowledge of telescopes in the late 16th century, but the instrument was not seriously used until the early 17th century. Brahe is not wearing the Order of the Elephant in the work and therefore if genuinely 16th century, that would place the date at 1578 or before: but it may also indicate a later artist’s ignorance of the honour.

The donation of this painting is noted in the Society’s Journal Book: “Mr Hodgson presented the Society with the Picture of Tycho Brahe, and of the Revd. Mr Flamsteed late Regius Professor of Astronomy at Greenwich: and the Pictures were given to Mr Hauksbee, to get them hung up in the most convenient place.” [Royal Society Journal Book Original, JBO/15 p.185 meeting of 23 November 1732].

The circumstances behind this presentation are explained by Mrs Flamsteed’s will: “Item. I give to the Royall Society in Crane-court, Fleet Street, London, an Original Picture of the late Mr John Flamsteed, at half-length, drawn by Mr Murry, and also give a Picture of Tycho Brahe, a three-quarters length, with each of their respective frames, to be placed where the Pictures of Mr. Boyle and other persons of that learned Society are fixed.” [Quoted in a letter, Colin A Ronan, 9 December 1978, to Norman Robinson. In the Royal Society provenance file for the portrait of Tycho Brahe]. James Hodgson (1678?-1755) married Ann Heming, the Flamsteeds’ niece and subsequently donated objects belonging to Flamsteed to the Royal Society.

This picture was presented with the Society’s portrait of John Flamsteed by Thomas Murray. Both were owned by John Flamsteed.
Associated place
<The World>
> Europe
> Denmark
Credit
© The Royal Society
Image number
RS.9611 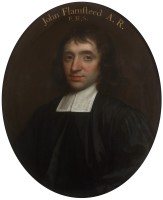